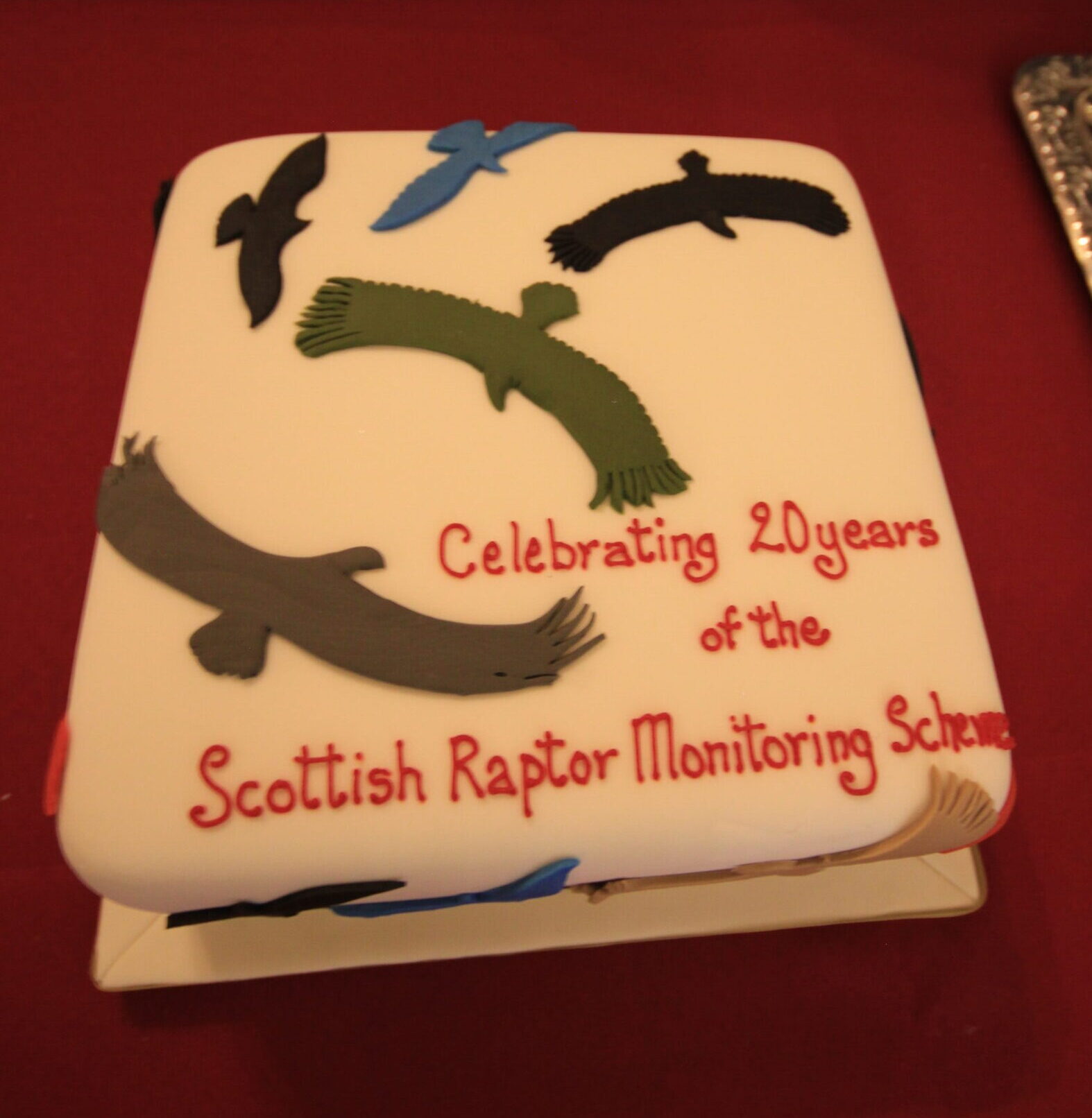 In 2022, the SRMS marked its 20th Anniversary with a celebratory event at Atholl Palace Hotel, Pitlochry where the formal agreement which launched the Scheme had been signed by the original seven SRMS partners in 2002. The event was attended by just over 100 individuals.

A series of presentations was given by a range of speakers which guided the audience through the breadth of work of the SRMS, followed by a drinks reception generously sponsored by Wildland. You are able to access the slides/videos from  many of the presentations below interspersed with the transcript from the  introductions to the speakers as given on the afternoon by Amy Challis (Scottish Raptor Monitoring Coordinator) who chaired the event.

While we already have our sights on what the SRMS might look like 20 years from now, I think it is really important to reflect all we have achieved over the last 20 years, and with that in mind I am going to invite forward Patrick Stirling-Aird to say just a few words on where it all began. Patrick is I’m sure a familiar face to many of you in the room. He is currently Secretary of the Scottish Raptor Study Group and he has been involved with the SRMS from the outset.

The Scheme currently focuses primarily on the annual monitoring of diurnal birds of prey and owls native to, and regularly occur within, Scotland – 20 species in all, which includes our honorary species – Raven. Raptors are a fantastic group to work with, and to give you his take on why raptors are brilliant, I would like to welcome David Jardine, who is the current Chair of the Argyll branch of the Scottish Raptor Study Group.

The Scottish Raptor Monitoring Group meet several times a year to discuss progress against our agreed work plan, ably chaired by Andrew Stevenson of NatureScot since 2010. I’d like to welcome Andrew to share the Group’s perspective on what we collectively believe to be our biggest achievements over the last couple of decades.

Volunteers are essential to making the SRMS work. Collectively volunteers put in the equivalent of £2 million on-the-ground monitoring each year which results in valuable data that can be used by the SRMS and its partners. The vast majority of data that reaches the Scheme does so via the Scottish Raptor Study Group, and to talk to you a bit more about the importance of volunteers to the work of the SRMS, I would like to welcome Logan Steele, who is Communications Secretary for the Scottish Raptor Study Group.

Over the summer I took the opportunity to spend some time out in the field with some of our long-term data contributors to give them a chance to share their perspective in this short video.

SRMS data are used by the SRMS directly to report on regional and national trends in breeding numbers and productivity, which you will hear about a little later on but we will now hear about some other ways that SRMS data contribute to conservation. We will now hear from Kenny Kortland, Wildlife Ecologist with Forestry & Land Scotland, to speak on behalf of a number of partners on how SRMS data are used by partners.

We are aware that there has been Scheme-envy from elsewhere in the UK and even further afield, for what we have been able to develop here in Scotland. We have now got somebody who is going to be able to provide a little more of the international context for the SRMS. David Stroud retired from JNCC a few years ago but like Patrick Stirling-Aird was involved with the SRMS from the very beginning.

We invited the Minister for Environment & Land Reform Mairi McAllan MSP to speak this afternoon. She has kindly provided a pre-recorded message which we will share with you now.

The most valuable data that the SRMS holds comes from long-term studies. Data from such studies (where we can be confident that coverage has been comprehensive and consistent from one year to the next) is really important for enabling the SRMS to produce robust trends, particularly in terms of breeding numbers. Earlier on Logan mentioned three such studies, and we are now going to here from a long-term SRMS data contributor who has been contributing data for a discreet study area for the lifetime of the SRMS. Please give a very warm welcome to Mike Bell, who is a member of the Tayside & Fife branch of the Scottish Raptor Study Group and is going to share with us his experiences of monitoring the rise and fall of a population of Buzzards within Perthshire.

This afternoon we have talked quite a bit about the herculean efforts that go in on the ground by individuals to collect the data that is contributed to the Scheme, but less so about the equally huge amount of work that goes into cleaning, curating and reporting these data each year. This important work is undertaken by the BTO. I am going to handover to Chris Wernham, the Head of BTO Scotland, who is going to share with you the fruits of a collective labour that has been 20 years in the making.