Brian Etheridge is the Data Manager for the Highland Raptor Study Group, and used to coordinate SRMS as the Raptor Monitoring Officer. 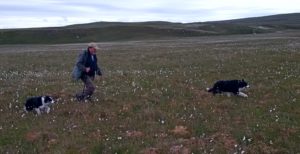 Brian’s passion for birds started as a schoolboy on Tyneside in the late 1950s. After a 22-year service in the Royal Air Force, mostly as an aircraft technician at RAF Kinloss, Moray, followed by 29 years with RSPB Scotland monitoring Hen Harriers and Red Kites based at their Highland Office, he became the first Raptor Monitoring Officer (part-time) for the Scottish Raptor Monitoring Scheme between 2003 and 2016. He has been a member of Highland Raptor Study Group since the beginning and currently manages all their records. Brian is passionate about birds of prey, border collies, waders, the Isle of May and Hen Harriers but not necessarily in that order. Now semi-retired, he is involved in the Heads up for Harrier initiative as a field worker and “relaxes” with friends at a bird ringing site near to his home on the Black Isle.